Carnival Birthday Party - All About Games

My daughter came up with the idea of a carnival-themed party for her birthday, and it was so much fun to get ideas and plan.  I hope what I share can help inspire your next celebration. 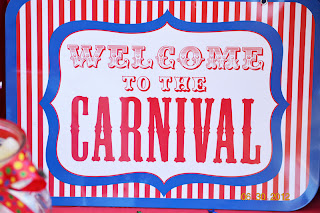 From the first mention of the idea, we began planning - writing down ideas, looking in magazines and on Pinterest for decorations, making the list of food we'd have.  From that list of ideas, I whittled it down to what was achievable, and then agreed to consider it a success if I just pulled off 80% of our plan.  This relieved a lot of stress, and helped me prioritize and plan the most important ideas first and save some of the "would be nice if it happened" for "if there's still time."
First, I enlisted help from my family and friends - from saving cans for games to blowing up balloons the week before to pulling pretzels out of the oven the morning of the big day.  The planning and idea stage was about 2 months prior to the party, which helped tremendously in not feeling stressed by the rush to get it all done.  Having time on my side was more helpful than I even imagined.  I'm not someone who typically plans that far in advance for any big event - except for a Disney trip :-). So this was definitely new territory, but all the accolades on Party Day made it worth the effort.
Being on a budget, I listed our game ideas and what materials we'd need to create them.  We narrowed it down the ones that would be most fun for the age group and also least costly.  I tried to use materials we already had around the house or could borrow.  I even had 1 or 2 "maybes" in case we ran out of time or room, or a planned game had to be taken off the list.
GAME SIGNS
The signs for each game were something I started on in advance.  I liked a few ideas I saw with the triangle banners.  I used constructions paper mostly. For some game titles, I used scrapbook paper that fit in with the color scheme (primary colors, mainly red, yellow and blue).  I wrote down game titles for all the planned (and backup) games, so I would know how many coordinating triangles I'd need for each, then all three of my children and I cut them out.   I got them involved anytime I could.  They were excited to be helping. 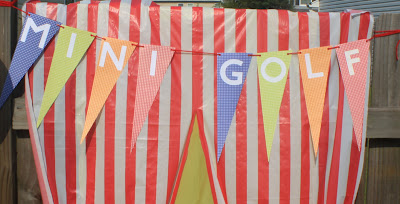 On each triangle I glued a letter - most of these were cut out with a Cricut® machine that I borrowed.  This saved a ton of time and also looked great!!  I punched holes on the ends and threaded red yarn through to connect them.
A few game signs (with long titles), I printed on paper with a Rosewood font, and matted the sign with festive paper. 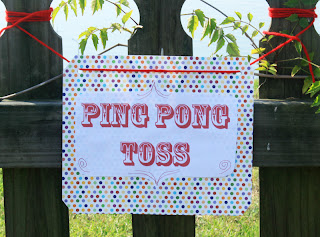 PRIZES
With each game, the player earned tickets toward prizes at the end.  I gave a ticket just for participating/trying, but more tickets for obtaining the goal. More details about the tickets and prizes...

1. Balloon Darts ($10.50 for 36 darts at Oriental Trading; $6 for balloons)
For the balloon darts game, I found a fairly large piece of cardboard in our garage and tested pinning a balloon to it to make sure it'd stay with a thumb tack.  I also tested how long the balloon remained inflated (in the garage) to determine how far in advance I could set up the balloons on the board before the party.  Blowing up 5" balloons with an air pump lasted over a week before they began to deflate and lose air.
I wasn't able to find a large selection of multi-colored balloons in the 5" size, so I ended up getting a few packages of tye-dye water balloons, which looked and worked great.
I covered the piece of cardboard in some left over table covers (red, yellow and blue).  Next I fastened (with thumbtacks) all white balloons to form a number 9 in the center (her birthday age). Finally, I filled in the rest of the board with the color balloons.  To earn tickets, I decided that popping a white balloon would also be worth more. 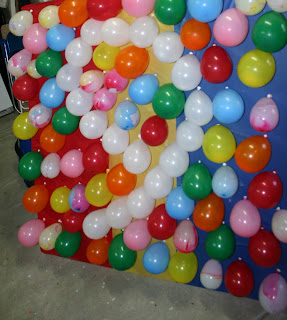 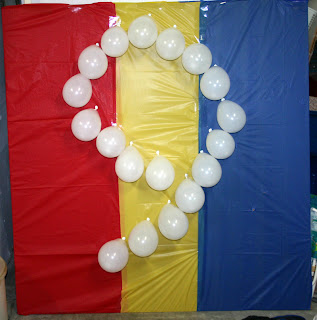 I ended up using about 90 balloons on the board, then blowing up an additional 90 to use for refills as the game was played throughout the day, putting the extras in plastic garbage bags.
I ordered the darts form Oriental Trading - they had primary, fun colors and in a large quantity, which ended up being the best price.  Each player received three darts.  I rewarded 2 tickets for each balloon; 3 if it were a white one.

2. Clothespin Drop ($0)
I used an empty glass candle jar (about 9" tall), cleaned it out with lamp oil, to remove the wax. The kids painted a couple of clothespins, and this was placed on an outdoor blanket for the game.  The object is to stand over the jar, hold the clothespin to your nose and try to drop it in the jar.  We gave each player three pins. 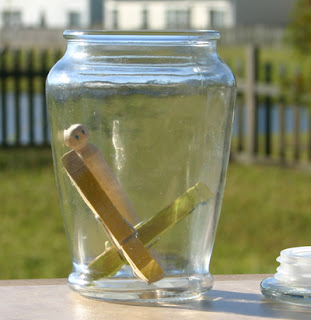 3. Bottle Bowling ($4 water bottles)
For this, I decided to use water bottles as the pins.  I had the kids test out several types of balls in advance to decide which was the most successful, but also challenging, in knocking them down.  We ended up using baseballs, which were a perfect weight to knock down the filed bottles. I kept the lids and filled the bottles with water, nearly to the top, which ended up weighing right at one pound each.  For a festive disguise, I covered the bottles in some colorful scrapbook paper.  I used a piece of 1/4" board from our garage as the alley and drew the arrows on it with a red marker, to emulate a bowling lane.  Any flat surface would work - if using a sidewalk, patio or driveway, you could use chalk to draw the triangles. 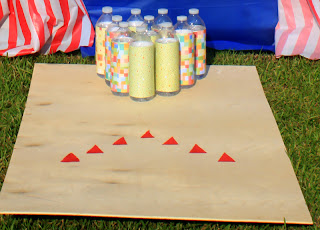 4. Photo Booth ($3 for props)
For the "stage, I used a nylon puppet theater to set the stage for our photo booth.  I had this in a "donate" bag, but pulled it out for the party, when I saw this idea. I looked at ideas for props, and even saw some in the store later, but cut out my own with construction paper and glued them to bamboo skewers. I also had the kids look through former dress-up costumes for fun things like hats and silly glasses. 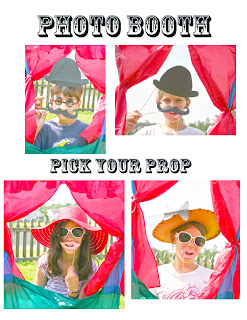 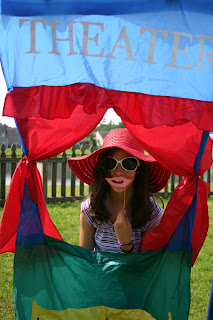 I set this up by taping it (on the top) to our swing set.  I had the kids use props and pose for pictures ahead of time.  Then I printed off a few photos to show ideas for how it worked.

5. Baseball ($0)
For this game, I used aluminum cans (canned veggies), well rinsed.  I also covered these in scrapbook paper to camouflage.  We set this up on a card table and used whiffle balls to knock over.  Tennis balls would have worked as well. The reason we didn't use actual baseballs was because we thought if someone's aim wasn't perfect, a stray whiffle ball would probably be the less damaging or painful. 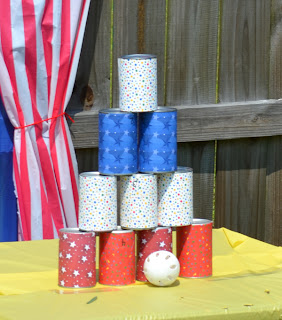 6. Shooting Gallery ($7 for golf tees; $6 for ping pong balls; $1 for package of three water guns )
This fun game involves shooting water guns at the ping pong balls to see how many can be shot off the golf tee.  I used part of a 2x4 board in our garage, and had my husband drill holes in it, just deep enough to hold a golf tee.  I bought a bag of white golf tees and used the kids’ leftover acrylic paints to brighten them up for the carnival.  After adding some ping-pong balls and a few tiny water guns, this game was complete.  We used a saw horse, covered in a table cover, to hold the board. 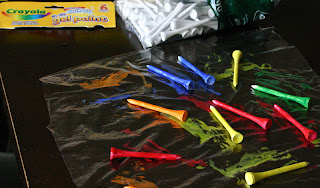 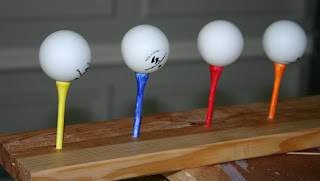 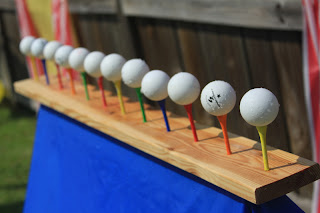 7. Ping-Pong Toss ($6 for ping pong balls [used one package for both games 6 and 7]; $5 for clear cups)
Our second use for the bag of ping pong balls was a toss game, into cups of water.  I used clear plastic cups, filled with water.  A few of them had blue food coloring, a few more had red, and the rest were clear.  The colors were worth more points, and also in a more difficult place on the table.  Each player got three attempts. 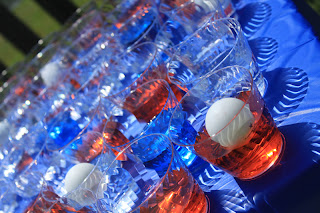 8. Ring Toss ($1, bracelets; about $12 for bottles of IBC)
Until my dad offered a terrific original Coke crate (which I used), my first idea was using an old box.  I'd cut around the sides so that only 4-5" were left.  Then I used paint to decorate it with red and white stripes.  Since we don't use glass bottled drinks often, I looked for sales and stocked up when IBC went on sale.  I bought some regular root beer (brown bottles) and also some black cherry (in clear.  They make great floats for the kids, if you have trouble drinking all that soda.  For the rings, I used some hard plastic bracelets from the Dollar Store. 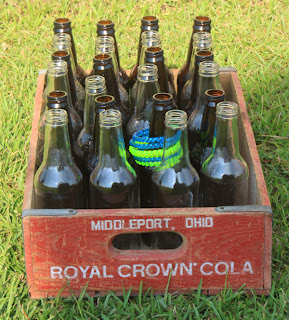 9. Mini-Golf ($4)
On a trip to Home Depot one day for some paint, I looked at the clearance shelf and found a gem for one of the games.  It was a wooden, build-it-yourself castle for mini-golf.  This was a great find, because my son would enjoy building it, and it would serve as a fun game - plus the kit was only $3.  Using a small container of mis-tinted paint ($1), this was perfectly-priced game. 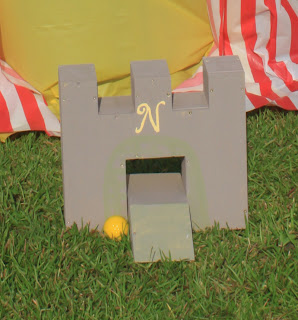 10. Face Painting ($12 for paint kit)
My daughter (not the birthday girl) volunteered to paint faces and practiced on the other two the week before.  She drew on a poster the 6 decorations she could do, and had "customers" pick one. 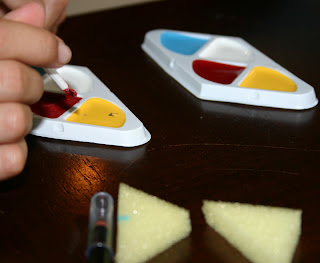 11. Guess How Many Gumballs
We counted ahead of time and filled a Mason jar with gumballs - the closest guess got to take the jar home! 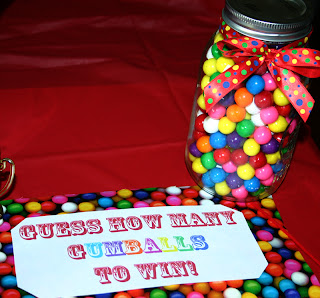 Other ideas we had - but didn't use this year:
- ducks in the pond (baby pool) - picking the one specially marked to earn a prize
- Cake Walk
- Pie in the face
- Bean Bag Toss
- Fishing (using pole with magnet and paper fish in a pool/pond (dry), also with magnet to see how many you can catch
- Bobbing for Apples:  I borrowed a metal galvanized tub for this activity.  However, before the party, some of the kids in the group had become ill, so I decided it wouldn't be a good idea to share water at the party.  Instead I ended up using this for ice and cold water.